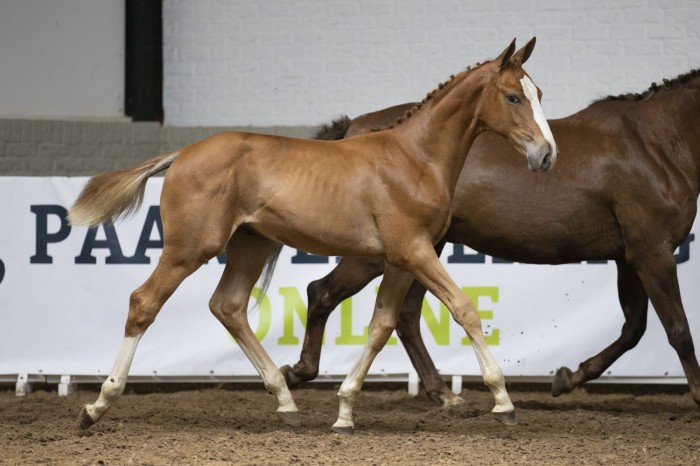 GREAT INTEREST IN EMBRYOS, MOST EXPENSIVE €19,500

The fifth auction of 2021 ended on Saturday evening. There was once again great interest in the appealing collection of foals and promising embryos. Several foals and embryos have been sold abroad. Nevertheless, a large number of more expensive foals and embryos remain in the Netherlands. The embryos, both implanted and frozen, were in great demand this edition. An implanted embryo of Baloubet du Rouet became auction topseller with €19,500. He came into Dutch hands.

There was a lot of competition for the implanted embryo of Baloubet du Rouet, out of the international mare Korina van 't Hoogeinde (by Echo van 't Spieveld). In the end, two Dutch bidders remained, one of which was the new happy owner. The other Dutch bidder became the owner of an implanted Chacco Blue embryo from a For Pleasure mare, who comes from a proven sport line. This embryo changed hands for €18,500.

An implanted Chacco Blue embryo from a Mr. Blue-mare was sold to Norway for €10,100. Emerald van 't Ruytershof's implanted embryo remained in the Netherlands for €10,000.

The most expensive foal was Run DMC K (by Zirocco Blue). He will also stay in the Netherlands for an amount of €12,500 and will be reared for the stallion inspection. Two foals were knocked off by the virtual hammer at €9,000. It concerns Maserati HTW (by Emerald van 't Ruytershof, who is leaving for Hungary, and Rigoletto (by Cornet Obolensky), who is staying in the Netherlands.

Some talents preserved for the Netherlands

We are very satisfied with this edition. The bar was once again set high in the collection and we had something for everyone in the collection and also for every wallet. We are certainly satisfied with the progress of the auction. The average price was almost €6,500 and 95% of the collection has actually been sold. We think it is very nice for Dutch sport and the ambitions of our country that many horses have been preserved for the Netherlands. We are already looking forward to our next auction with great enthusiasm.

Are you interested in selling your foal, embryo, broodmare or young jumper in one of the editions of the auction or do you have questions about the auction? Please contact us.