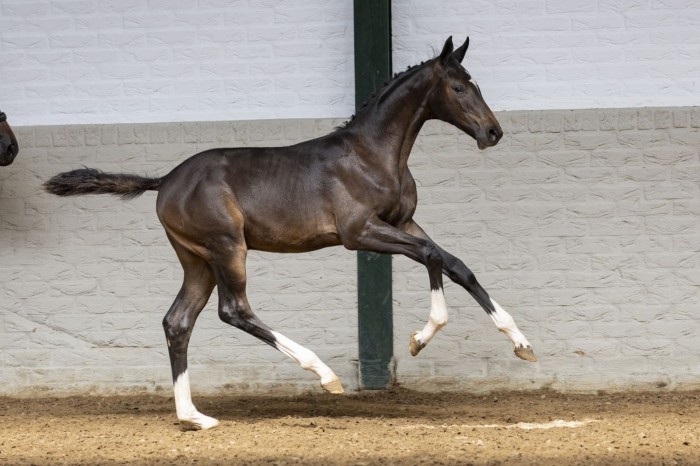 The 5th auction of this year ended on Saturday evening. The varied collection consisted of 34 high-quality bred jumping foals as well as seven exclusive embryos. The interest in the auction was enormous, both at home and abroad. The two auction toppers were sold to a highly valued customer from America and a show jumper from Mexico.

The auction topper was the filly Aurora Borelias DCK Z. After an exciting bidding duel between America and Denmark, this filly was sold for a nice price of no less than €29,000 and is now in the hands of the American buyer. The sire of this appealing foal is the stallion Air Jordan Alpha Z, the clone of the Grand Prix sport and breeding stallion Air Jordan Z, who was successful with Daniel Deusser. The oldest offspring of Air Jordan Alpha Z are at the age of eight at the beginning of an international sports career. The sport genes are anchored in this foal for several generations.

The second money was paid for the promising granddaughter of Grand Prix mare Elien, Sexplosion (by Chacco-Blue). She was sold to a Mexican rider for a very nice sum of €25,000. Dam Icelien W is a daughter of the mare Elien, who is classified at 1.60m level under Katharina Offel, who previously produced Karelien W (IBOP 90.5) with Willem Greve at international 1.40m level in combination with Comme Il Faut. Elien also produced the well-tested, Kathelien W (by Cornet Obolensky, IBOP 84), with whom Katherina Offel has already won international young horse tests.

Most expensive embryo to the USA

Very grateful for the trust

We are extremely enthusiastic about the progress of this year's 5th auction. It was another fine collection with quality foals and promising embryos. As with every auction, we had very fine foals in the collection for every type of buyer. Every auction we continue to grow and we are very grateful to our entire team, the breeders and the bidders that they always find their way to us and have confidence in our platform. The average price this time was just over €9,000 and 90% of the collection has been sold, something we are very happy with. Congratulations to everyone with this great result and on to the next auction.

Do you have questions about one of the following auctions? Or are you interested in selling an embryo, foal, young jumper or broodmare? Then click here. Our next auction is from September 28 to October 1, 2022.