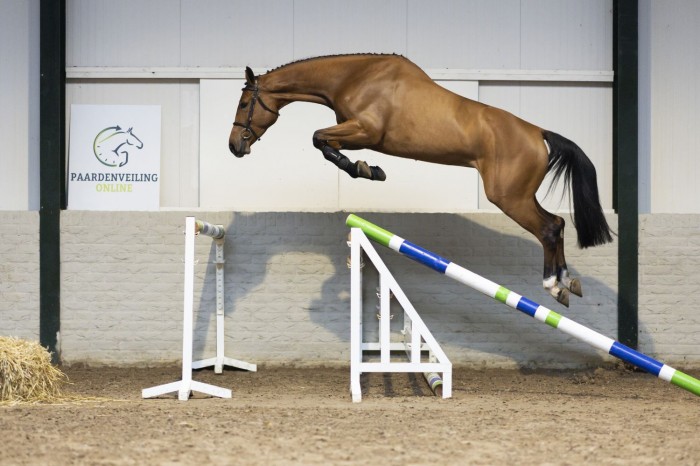 END THE YEAR WITH A BANG WITH THE LAST AUCTION OF 2022!

The fast-growing top sire Eldorado van de Zeshoek proves himself at the highest level with offspring such as Grandorado TN, Killer Queen VDM and Elektric Blue P. He has been brought together here with a fantastic breeding Oldenburg mare. Ogossi is in fact a half-sister of four international show jumpers. The bidding duel for this three-year-old talent was very exciting. There was interest from Great Britain, Germany and the Netherlands. In the end, the British buyers had the longest breath.

There was also great interest in Collin FZ Z (s. Colman). For € 24,000 he changed owners and left for a good Swedish customer. Colman proves his worth in breeding with top-performing offspring such as Catwalk IV, Con Dios III, Emir R and GP van Aken winner L.B. Convall. On his dam's side, Collin FZ Z represents the leading Holsteiner line 890, known from Casall, Berlin and Elmshorn.

Several horses have also been kept for the Dutch sport. Like Tangilia Wi Ro Z and Oneil TK. Both were knocked down at €20,000. The promising Tangila Wi Ro Z is a full sister of the international 1.40m jumper Thousend. Sire is the Grand Prix stallion Tangelo van de Zuuthoeve, who has distinguished himself in breeding thanks to excellent offspring such as Darry Lou, Tobago Z and Citizenguard Taalex.

The three-year-old, promising gelding Oneill TK was bred out of the mare Farina, who herself performed at 1.35m level. Sire Action-Breaker showed his great qualities at the highest level with Sergio Alvarez Moya and took part in the WEG and World Cup finals.

Tres Chique d'Amas Z is a five-year-old daughter of Tangelo van de Zuuthoeve. Mother Al Capone Z (by Andiamo) is a half sister of the Zangersheide approved stallion Call Quick Z (by Calvin Z). This appealing mare came into German hands for the handsome sum of €17,500.

Most expensive 2-year-old to Venezuela

The most expensive two-year-old in the auction was H. This 2.5-year-old stallion was bred from the same dam as the international showjumping horse Now and Ever (s. Numero Uno), who is classified at 1.50m level and participated in the European Championships for young riders last summer, and several 1.30/1.35m horses. Dam High Corrie is a half-sister of the successful Grand Prix horse Corlanda Old (s. Cordalmé Z), who has already won twenty international victories up to 1.50m level. This talent for the future has been sold to Venezuela for €13,000. It is the first time that a horse from the auction has been sold to this country, and the long list of buying countries continues to grow!

The interest grows every auction!

The Paardenveilingonline team looks back with satisfaction at the last auction of this year.

“A lot of horses have now been sold abroad again. It is nice to see that the interest is increasing with every auction and we can welcome new buying countries, such as Venezuela now.

A good number has also been retained for Dutch sport. The largest customer was a renowned sports stable from the Netherlands, which has often bought horses via Paardenveilingonline and has already achieved great success with it. For example, a horse from the auction competed in the World Cup final at Zangersheide for five-year-olds this year.

The average price of the horses sold was €14,000. Buyers, sellers and breeders thank you so much for your trust! Many thanks also to our fantastic team! We would love to see everyone back at our auctions in 2023.”

Do you have questions about one of the following auctions? Or are you interested in selling an embryo, foal, young showjumping horse or broodmare? Register your horse quickly. The next auction is from 25 to 28 January.