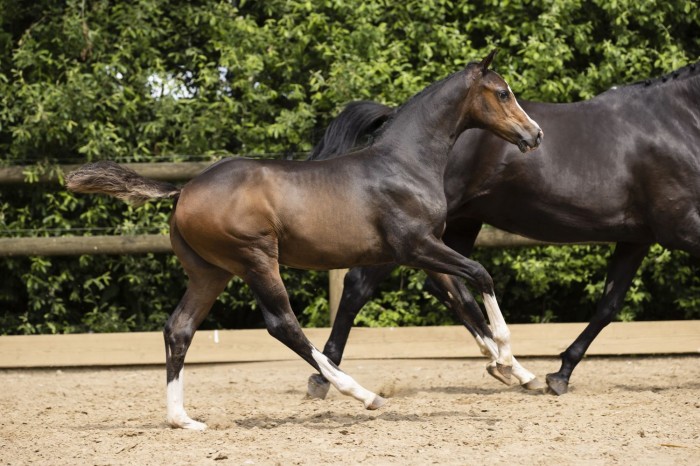 The fourth auction of 2021 of Paardenveilingonline.com ended on Saturday evening. There was once again great interest in the appealing collection of foals and promising embryos. Many foals and embryos have been sold abroad, in addition a number have been sold to various Dutch trading stables. Remigius E.C. was the most expensive foal of the auction with a final bid of €13,000.

There was a lot of interest in Remigius E.C. After an exciting bidding duel, Casall's son leaves for a Spanish show jumping rider. With successively the international sport stallions Casall, F-One USA and Voltaire, this interesting Remigius E.C. about a strong blood build-up. He also inherits remarkable jumping genes on his dam's side, because his young dam Kadess is a half-sister of no less than six international show jumpers.

The son of Grandorado TN out of the half-sister of Grand Prix horse Nanta found a new owner in America for €10,000. The Dutch also invested well. Quel Homme de Hus's colt out of a Cash du Plessis mare remains in our country for an amount of €9,500. A daughter of Billy King (vm. Action-Breaker) remains in Dutch hands for €8,500. A daughter of the Olympic stallion Hardrock Z (sm. Chin Chin) and a son of Inaico VDL (sm. Berlin) will also stay in the Netherlands for an amount of €7,000.

Niels Mulder and Alwin Scholten, the driving forces behind Paardenveilingonline.com, look back on this edition with great satisfaction. “We were once again able to put together a very good collection, in which the bar was set very high. There was something for every buyer in the collection. More than 90% of the collection has been sold, which is fantastic for both buyers and breeders. It is also very nice to see that interest from abroad is still increasing with every auction. We are proud that many foals and embryos go abroad, but we are also happy with the sales in the Netherlands. That ultimately benefits the national sport again. Together with the entire team, we once again set up a successful auction.” The average price was almost €7,000.

Are you interested in selling your foal, embryo, broodmare or young jumping horse in one of the editions of the auction or do you have questions about the auction? View our FAQ.