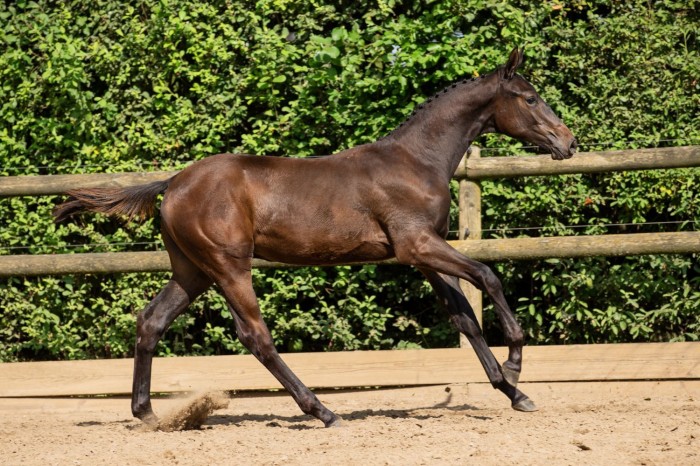 MUCH PRESERVED FOR THE FUTURE OF DUTCH SHOW JUMPING

The sixth auction of 2021 of Paardenveilingonline.com ended on Saturday evening. In this edition, too, the interest in the promising embryos and high-quality jumping foals was enormous. There was a lot of bidding from all over the world, yet a large number of foals and embryos are preserved for the future of Dutch show jumping. With a final offer of €26,000, the implanted embryo of Carthago will remain in Dutch hands.

This future filly out of the mare Pink vd Bisschop (by Vigo D'Arsouilles) will be used for sport and breeding. Sire Carthago participated in two Olympic Games under Jos Lansink. In the maternal line, this embryo goes back to the famous stock dam Usha van 't Roosakker.

The most expensive foal changed hands for €17,000 after an exciting bidding duel. It concerns the colt Ringo Starr. A son of the high-profile Belgian champion stallion O'Neill van 't Eigenlo, who has a bright future ahead of him with McLain Ward. Ringo Starr will also stay in the Netherlands and will be raised for the stallion selection. The interestingly bred filly Rihanna GP (by Chacco Blue) is moving for an amount of €15,500 to the United States, where she will be used in breeding. Chacco Blue has fully proven itself in breeding with top offspring, such as Explosion W. In the dam line we also see a good sport line with many Grand Prix stallions.

It was the last auction of this year in which foals were included in our collection and again we were able to offer a lot of quality and we had something available for every pocket. With every auction we can welcome more countries to our auction. In addition to countries such as Germany, Belgium, Italy, Spain, Great Britain and the United States, we also sold a foal to Iran this time. We are very happy with all our foreign customers, but we also think it is very nice for Dutch show jumping that a large number of high-quality foals and embryos have been preserved for our country. We are looking forward to our last auction of this year, in November.

This year we are organizing one more auction, which will run from 17 to 20 November. In this auction, talented young show jumpers will be put under the virtual hammer. Are you interested in selling your young jumping horse? Or do you have questions about the auction? Contact us!