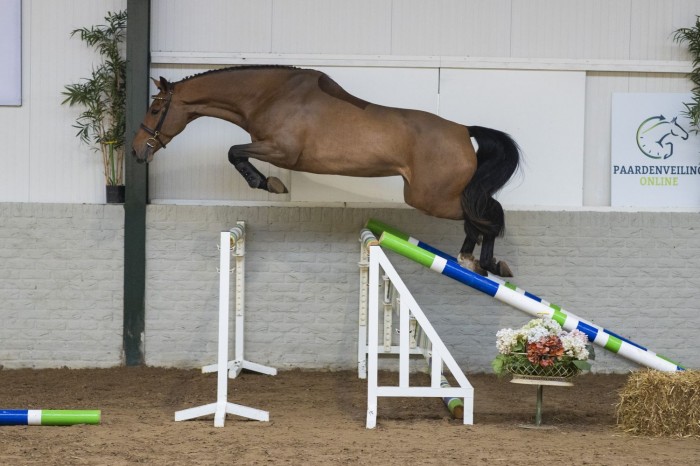 The first auction of 2022 ended on Saturday evening. There was a lot of interest from all over the world for the 30 talented young show jumpers. The quality was clearly present in the entire collection and all horses were actually sold. Notre Dame Salland was the auction topper with an amount of €28,000. Five horses changed hands for more than €20,000.

Notre Dame Salland has a valuable blood build-up through successively four international sport and breeding stallions. Her sire Numero Uno has made a big name for himself as a progenitor thanks to top jumpers such as Tamino, Tobalio, Van Gogh, Winchester HS and Cristello. The almost four-year-old mare goes to a young German top rider to be further trained there.

Two horses were knocked off by the virtual hammer at €25,000. A four-year-old gelding of Diamant de Semliiy is leaving for the United States. Nena also changed hands for €25,000 and is in Colombian hands. This four-year-old mare combines the highly productive Olympic show jumping stallions Cornet Obolensky and Zirocco Blue VDL. Her grandmother Lavender has more than earned her spurs in breeding.

There was also a lot of interest in the three-year-old stallion Nixvinio MB Z. His sire is the genetically interesting stallion Nixon van 't Meulenhof, who is making great strides in international sport and breeding. This half-brother of the Olympic stallion Emerald van 't Ruytershof is here combined with the prominent lineage of the international Grand Prix show jumper Havinia. After an exciting bidding duel between Sweden and Ireland, Nixvinio MB Z will leave for Sweden for €24,000.

The four-year-old gelding Nigel comes from the same dam as the KWPN stallion Liverpool (by Tangelo van de Zuuthoeve). Nigel represents a strong performance line and he came to the second viewing at the KWPN last year. For him, the virtual hammer was knocked off at €21,000 and he leaves for a professional stable in the United States.

The interest from the Netherlands was great and a number of horses are therefore also retained for the Dutch sport. Internationally, interest continues to grow with each auction. Mainland countries such as Germany, Poland, Spain, Norway, Sweden, Belgium, the United States and Italy were once again welcomed. New countries in this auction were Luxembourg and the United Arab Emirates.

We are very satisfied with the progress and look back on the first auction of this year with a good feeling. "We had once again put together a beautiful collection with young promising show jumpers and this time too there was something for every wallet. All 30 horses have actually been sold, which is unique for an auction! The average price was over €15,000, with five horses over €20,000 Congratulations to all buyers and sellers with this beautiful result and on to the next auction."

The next auction is from 23 to 26 February, you can still register your broodmare or embryo this week!

Do you have questions about one of the following auctions? Or are you interested in selling an embryo, foal, young jumper or broodmare? Then click here.