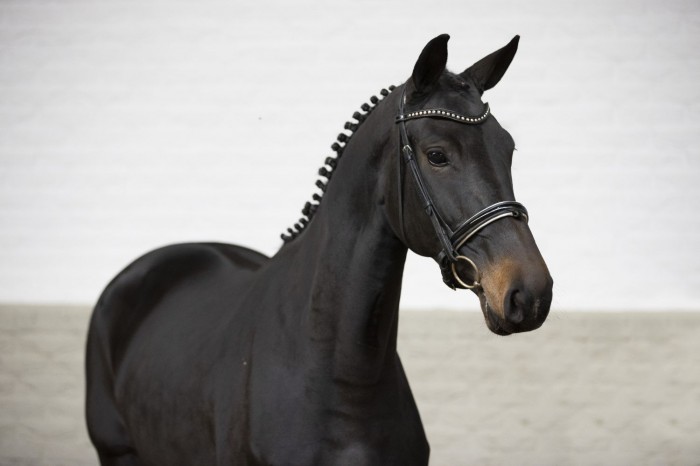 Our seventh and last auction of 2021 ended on Saturday evening. In the collection 23 promising young showjumpers aged 2.5, 3.5 and 4.5 years. Interest from all over the world was once again great. The impressive 3.5-year-old mare Night Lady K (by Il Est Balou) was the auction topper with a final bid of €38,000. She comes into Polish hands.

This 3.5-year-old mare comes from the second crop of Il Est Balou, who makes a big impression under Albert Zoer. The modern and genetically interesting Balou du Rouet son now continues his sporting and breeding career in America. After an exciting bidding duel between renowned stables from the United States, Great Britain and Poland, Poland came out on top.
The 2.5-year-old Centurion also came into Polish hands and was knocked off at €21,000. Centurion comes from a strong dam line, which goes directly back to the famous mare Folia. This multiple stallion dam is very influential, especially through her son Capitol I, and can be found behind countless international sport horses.

As with the auction topper Night Lady K, it was also exciting to see who the AES stallion Billy HTW would go to. A customer from Mexico had set his sights on this special stallion, but a respected German customer also wanted Billy to move into a stable with them. In the end, the winning bid was from our Eastern neighbors. Billy HTW is of strong descent. His sire Tangelo van de Zuuthoeve performed at the highest level himself with Roelof Bril and has proven to be a remarkable sire thanks to offspring in the world's top such as Tobago Z, Darry Lou and Bintang II. Also interesting is that Billy HTW's dam Calida K (by Charakter) has proven herself in the sport at 1.55m level.

The 2.5-year-old stallion Jack van de Zeijerweg Z (by Jack Daniels EB) has found a new owner in the Netherlands for €20,000. The oldest offspring of his father (bred by Dierenkliniek and Studstation Enterbrook) make a promising impression, as does this striking stallion.

Several horses were also purchased from Mexico, including the 2.5-year-old stallion Kalle JS Z (by Kassander van t Roosakker). Dam Cella performed at 1.35m level herself and, in combination with Glock's London, already produced the international 1.45m show jumper Hanoi ridden by Ivan Malygin. The genetically interesting sire Kassander van 't Roosakker was a revelation at international 1.40m level, after which he was injured, and is developing into a remarkable sire.

The interest from the Netherlands was great and a number of horses are therefore also retained for the Dutch sport. Internationally, interest is growing again with every auction. We also welcomed fixed countries such as Germany, Poland, Spain, Norway, Sweden and Italy. In addition, a number of horses were sold outside Europe, including to Mexico and the United States.
The average price was over €15,000, with four horses above €20,000, and 95% of the horses have actually been sold.

The Paardenveilingonline.com team is very satisfied with the progress and looks back with a good feeling on the last auction of 2021. "We had once again put together a beautiful collection with young promising showjumping horses and again there was something for every wallet. Congratulations to buyers and sellers with this wonderful result and on to next year! January 26 to 29 is the next auction with 3- and 4-year-old show jumpers.”