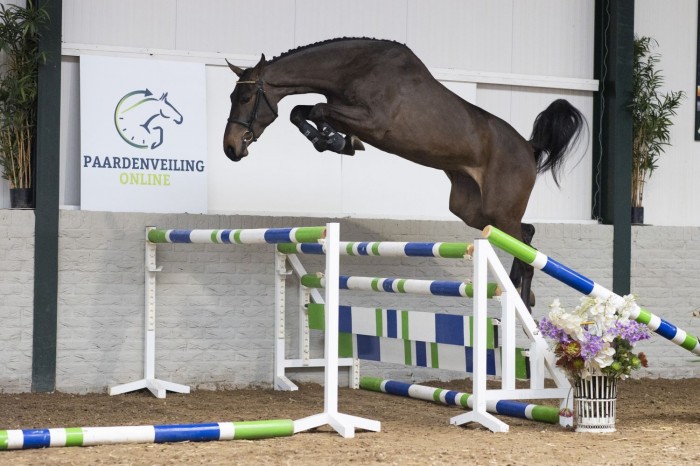 The third auction of Paardenveilingonline.com in 2021 ended on Saturday evening. There was enormous interest in the large collection of very talented three and four year old show jumpers. Many horses leave for countries outside Europe, but horses have also found a new owner within Europe and the Netherlands. With € 46,000, Chico ZG Z (by Cornet Obolensky) was the absolute top seller.

The three-year-old mare Chico ZG Z. Sire Cornet Obolensky shined at the Olympic Games and has been among the absolute world top as a sire for many years already early in the auction. In the pedigree of this striking three-year-old mare Chico ZG Z, he is brought together with the proven Banta-line. Dam Jirobanta, for example, is a half-sister of the international 1.50m level show jumper Zypria (by Triomphe de Muze) and the 1.40m level classified Vicibantos (by Burggraaf.) Chico ZG Z is leaving for the United States.

The three-year-old stallion Sky vd Middelstede (by Nixon van 't Meulenhof) was also in the spotlight. Under Harrie Smolders, Emerald's high-profile half-brother Nixon van 't Meulenhof recently made a convincing 1.50m debut. He is brought together here with a strong maternal line. His young mother is a full sister of the successful Grand Prix show jumper Domino, with which Jos Verlooy took part in the European Championships in Herning and Aachen, the WEG in Caen and Nations Cup and World Cup finals. Sky vd Middelstede has been sold to Turkey for € 24,000.

The collection also included AES approved stallions, including the three-year-old Tangilo Wi Ro Z (by Tangelo van de Zuuthoeve). Tangelo van de Zuuthoeve has distinguished itself in breeding thanks to excellent offspring such as Darry Lou, Tobago Z and Citizenguard Taalex. This promising three-year-old Tangilo Wi Ro Z is a full brother of the internationally 1.40m-classified Thousend Dollar. He was knocked down under the virtual hammer at € 21,000 and is leaving for Ireland.

Three horses changed hands for an amount of € 16,500. The four-year-old gelding Most Wanted Baraka (by Casago) has found a new owner in Turkey. The three-year-old stallion No Doubt V&V (by Zambesi TN) is leaving for Lithuania. Massey Ferguson MG (by Cohinoor VDL) is a four-year-old gelding and will stay in the Netherlands.

Niels Mulder and Alwin Scholten, the driving force behind Paardenveilingonline.com, look back on this edition with great satisfaction. "We had a very good collection again with a lot of quality, including a number of horses that are definitely a promise for the future towards the highest level.

More horses were now under the virtual hammer than in the January edition. Even though the collection was a lot bigger, the average price was still almost € 14,000, which is of course very nice.

The buyers were eager and almost 85% of the horses have actually been sold. horses remains big, both in Europe and beyond. In addition to returning countries such as Germany, Belgium, Hungary, Poland, Ireland, Great Britain, Canada and the United States, we were able to welcome new countries such as Lithuania, Turkey and Colombia. the buyers know where to find our auction. I am very grateful for the entire team around Paardenveilingonline.com, which has again made this auction a great success! "