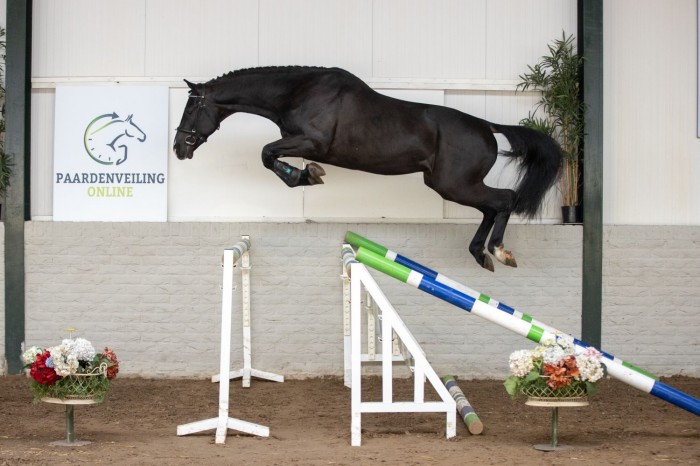 The third auction of 2022 of Paardenveilingonline ended on Saturday evening. The high-quality collection consisted of 24 promising show jumpers. This includes 18 three- and four-year-old horses for the future (untreated, but also saddle-broken) and another six five-year-old sport horses, who are ready for the course. The interest from abroad was again great and there was a lot of bidding.

The black three-year-old stallion Cascorrado CM DXB was the absolute auction topper with €64,000. The son of the Grand Prix sport and breeding stallion Casall has found a new owner in the United Emirates. This black beauty is also genetically interesting on the mother's side. Dam Europa CM, Holsteiner lineage 1463, is a full sister of the six-year-old BWP stallion Commander Bond, who was already doing good business in the Belgian stallion competition. Via the valuable Grand Prix sport and breeding stallion For Pleasure, this line goes back to the G.Ramiro Z daughter Mivian and she is also known as the grandmother of the international 1.60m show jumper Cimano E (s. Unaniem), ridden by Robert Smith. won many awards.

The three-year-old mare Oiva (Gerardus x Comme il Faut) will be retained for the Dutch sport for an amount of €35,000. Murielle (Durango VDL x Corland) was knocked off by the virtual hammer at €34,000 and leaves for Colombia. Glamor Z (George Z x Corland) came close with €32,000. This four-year-old mare was sold to Poland. The United States also invested in horses again. Nottingham (Comme il Faut x Zirocco Blue VDL) among others came into American hands for an amount of €26,000. Despite the great interest from abroad, several horses are also kept for Dutch sport.

The Paardenveilingonline.com team is very satisfied with the progress and once again looks back on the third auction of this year with a good feeling. "We had a very nice collection and it is great to see that these horses are also valued among buyers. Several future horses have been exchanged for really nice amounts from owner. Many go abroad, but the Netherlands has also invested well. for the slightly smaller wallet we had very nice horses in the collection. We continue to grow and we are grateful to the breeders and buyers, that they keep finding their way to us. A large part of the collection has actually been sold and that with an average price of almost €20,000. Congratulations to everyone on the great result and on to the next auction.”

Do you have questions about one of the following auctions? Or are you interested in selling an embryo, foal, young jumper or broodmare? Then contact us!
The next auction of foals and (implanted) embryos will take place from 13 to 16 July 2022.