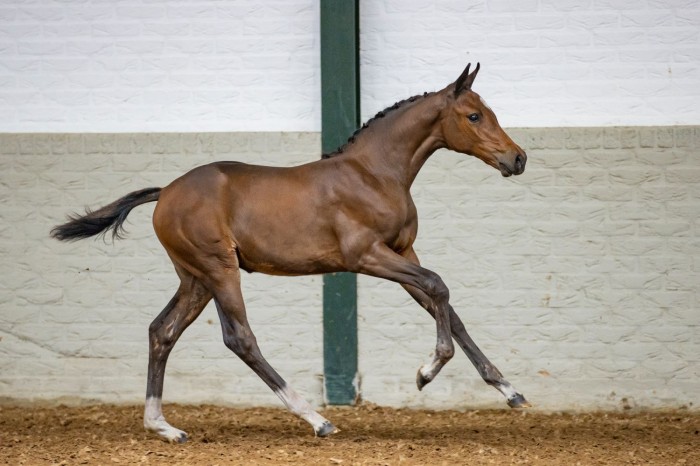 1ST FOAL AND EMBRYO AUCTION OF 2022 A RESOUNDING SUCCESS!

The 4th auction of Paardenveilingonline ended on Saturday evening, July 16, 2022. The high-quality collection consisted of 27 jumping foals with another seven promising embryos. There was a lot of enthusiasm and there was a lot of bidding from customers from home and abroad. No less than 95% of the foals changed hands and all embryos have been sold!

The 2 most expensive foals to America

There was a lot of interest in the foals from all over the world, but with the most expensive two, a highly valued American customer came out on top. The filly Selien (Diarado x Kannan GFE) was knocked down by the virtual hammer at a whopping €19,000 after an exciting bidding duel with Brazil! Sammy Blue AWH Z, the filly of Sambucci de Muze out of a Kannan GFE mare, yielded slightly less: €18,000. Several foals were also kept for the Dutch sport, such as Uranium RWL Z. This colt is a descendant of Uracis vd Kattevennen out of a Comthago VDL mare and was sold for €11,000 to a renowned Dutch sport stable.

The embryos were also a resounding success. The implanted embryo of top progenitor Emerald van t Ruytershof out of the Grand Prix mare Sterrehof's Ushi was the auction topper and was sold to Sweden for a handsome amount of €20,000. Sterrehof's Ushi performed for years in Grand Prixs and Nations Cups with Julia Houtzager-Kayser and is a granddaughter of the Grand Prix mare Narcotique de Muze II, with which Eric Lamaze jumped at the highest level. She is the dam of the Grand Prix horses Boyante de Muze, Sea Coast Ferly, Giovani de la Pomme and Querlybet Hero. The sports genes are therefore firmly anchored in this embryo.

Also for the smaller wallet

The Paardenveilingonline team looks back with satisfaction at the 4th auction of this year. “We once again had a nice collection with high-quality foals and promising embryos. We also had very nice foals in the collection for the slightly smaller wallet. Every auction we continue to grow and we are grateful to the buyers, breeders and our entire team that they trust and contribute to our success every time! The average price this time was almost €8,500, which is of course fantastic. Congratulations to everyone with this great result and on to the next auction.”

Do you have questions about one of the following auctions? Or are you interested in selling an embryo, foal, young jumper or broodmare? Then click here. The next auction is from 24 to 27 August 2022.